The other common names for the herb feverfew are Bride's Button, Compositae, Featherfew, Featherfoil, Febrifuge Plant, Wild Chamomile and Flirtwort.

The name Feverfew is based on febrifuge, the herbalist term for the action of reducing fever. The generic name is of uncertain origin, but may come from tanaos An altered form of "athanasia" meaning long-lived because of the duration of flowering; its emmenagogic property is associated with the Greek parthenos, virgin. The Greeks called it pyrethron, probably from pyro, meaning "fire", descriptive of its taste. This became pyrethrum to the Romans. Feverfew was first designated botanically as Matricarea as a close relative of chamomile. 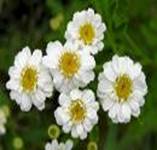 Since then, it's been joined with the chrysanthemums and the pyrethrums. Brought to North America by European settlers, it now grows wild in the United States and Canada. Pyrethrum is derived from the Greek pur (fire), in allusion to the hot taste of the root. Feverfew is indigenous to Europe and the Balkan peninsula and is said to have grown around the Greek Parthenon, thus the species name parthenium.It is more commonly known today as the Wild Chamomile, because it so closely resembles Chamomile. It is also known as German Chamomile and Scented mayweed.

Feverfew has made its way to both North and South America, where it is now naturalized. It was after the plant acquired the name that herbalists tried using it for fevers In the Victorian language of flowers feverfew stands for fire, warmth, and protection.

Small, bushy herb strongly scented with a height up to 4 feet and a width of 2 feet. The flowers are daisy like, with white petals and raised yellow centre 1 inch in diameter, clustered together with up to 30 heads. Thus they have numerous, small, daisy-like heads of yellow flowers with outer white rays, the central yellow florets being arranged on a nearly flat receptacle, not conical as in the chamomiles.

The stem is finely furrowed and hairy, about 2 feet high; the leaves alternate, downy with short hairs, or nearly smooth-about 4 1/2 inches long and 2 inches broad - bipinnatifid, with serrate margins, the leaf-stalk being flattened above and convex beneath. The leaves are yellow-green, divided and flexible, shaped like miniature oak leaves 3 inches long. It blooms from June to August. The delicate green leaves are conspicuous even in mild winter. The whole plant has a strong and bitter smell, and is particularly disliked by bees.

Originally from the Balkan Peninsula and western Asia, the herb grows wild all over the northern hemisphere. Thus now it is widespread in Europe, North America, and Australia.

Feverfew thrives best in cornfields, gardens, waste ground and on banks. They can even make find a home in pavement cracks and walls.

It can be grown from seed or by root division. Cuttings can be rooted in early summer. Feverfew will grow in almost any soil though production is higher in fertile soil. Prefers full sun or partial shade and can survive drought conditions. Deer don't bother it and rare for pest or disease problems. Bees dislike it so don't plant around other plants requiring bee pollination. Seeds germinate easily in 10-14 days. Cover seeds lightly. Transplant in late spring/early summer with a spacing of 12-18 inches in the row and rows at 24 to 30 inches. Cuttings do not readily root and the mature plants will self sow readily. Tops are harvested just as the flowers are forming. For commercial purposes best harvest is the second year with year three having a smaller one and at that point it should be tilled under. Flowers dry easily in 4-6 days.

The aerial parts of the plant are most commonly used for its medicinal and commercial applications.

The button like white flowers of the feverfew plant is in bloom between the months of June to August.

Likely need for weed, pest and disease control - Weed control may be necessary to reduce competition; disease is generally not a problem. The major pests which need monitoring and may require control are slugs, snails and black fly. Aphids and leaf miners may occur.

• A decoction with sugar or honey is said to be good for coughs, wheezing and difficult breathing.

• A tincture made from Feverfew and applied locally immediately relieves the pain and swelling caused by bites of insects and vermin.

• It helps in relief of face-ache or earache of a dyspeptic or rheumatic person.

• The feverfew was used to treat problems such as headache, the development of menstrual irregularities in women, disorders such as stomach-ache, and all types of fevers in particular.

• The ancient Greek physicians used herbal remedies made from the feverfew in the treatment of "melancholy," the term may have included disorders such as persistent headaches as well as long term depression.

• Feverfew may prove useful in the treatment of all kinds of allergies and allergic reactions in the body of affected patients.

• The herbal remedies made from the feverfew can be used to induce flows in patients suffering from delayed or suppressed menstrual periods, at the same time, the herb is also useful in relieving the painful sensations associated with the menstrual periods and it also reduces the physical symptoms associated with PMS, including persistent headaches, irritability and muscular tension.

• Feverfew has also been used to relieve the pain and inflammation associated with arthritis.

• The nervous system is also benefited as the feverfew acts as a tonic, it helps in relaxing the tension and aids in lifting away persistent depression while also promoting sleep at the same time.

• The herbal feverfew remedies have also been used to treat disorders such as asthma, allergic reactions such as the hay fever, in the treatment of spells of dizziness and to treat ear problems such as tinnitus.

• Cut leaves and flowers as required. The flowers may be dried face down on a flat surface and used in potpourri.

The astro reports for the herb feverfew tell that it is strongly commanded by the planet Venus.
Folklores and Myths

Feverfew is used in herbal medicine and also has a magical reputation for preventing and curing certain conditions. Some folks mix these leaves with Hyssop Leaves and Rosemary Leaves in a mojo hand which they carry to Prevent Accidents. Others wish to Prevent Accidents while driving; they place feverfew, Comfrey Root, and a St. Christopher Medal in a bag and keep it in the glove-box or hang it from the rear-view mirror, anointing it with Van Oil for Protection while on the road. People who believe that an Enemy has put the condition of Accident-Proneness on them can make feverfew into a tea and bathe in it to take off the Trick that has adversely affected their safety.