The other common names for the herb eyebright are Meadow Eyebright and Red Eyebright.

The Eyebright is the only British species of a genus containing twenty species distributed over Europe, Northern and Western Asia and North America.

The flower of Eyebright somewhat resembles a bloodshot eye, which may have been part of what led ancient peoples to value this plant for eye problems, and there was even an old French term for Eyebright, casse-lunettes, which means "break your glasses." The name Euphrasia is of Greek origin, derived from Euphrosyne (gladness), the name of one of the three graces that was distinguished for her joy and mirth, and it is thought to have been given the plant from the valuable properties attributed to it as an eye medicine preserving eyesight and so bringing gladness into the life of the sufferer. 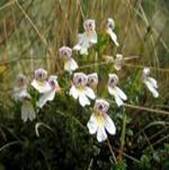 The same Greek word is also given to the linnet, whence another old tradition says that it was the linnet that first made use of the leaf for clearing the sight of its young and who then passed on the knowledge to mankind, who named the plant in its honour. An elegant little plant, 2 to 8 inches high, an annual that flowers from June to September, with deeply cut leaves and numerous, small, white or purplish flowers. The Eyebright will not grow readily in a garden if transplanted; it is a semi-parasite, relying on part of its nourishment on the roots of other plants. As the name suggests, Eyebright is great for the eyes. It's an antioxidant herb that fights free-radical damage, especially in the eyes.

The eyebright grows to upto 2 to 8 inches and it is erect and wiry, either unbranched in small specimens, or with many opposite branches. The leaves are 1/6 to 1/2 inch long and about 1/4 inch broad, opposite to one another on the lower portion of the stem, alternate above, more often lance-shaped, though sometimes, as already stated, much broader, and with four to five teeth on each side. The flowers, white, or lilac and purple veined, are in terminal spikes, with leafy bracts interspersed. The structure of the flower places the plant in the family of the Foxglove and the Speedwell - Scrophulariaceae. The corolla is two-lipped, its lower, tube-like portion being enclosed in a green calyx, tipped with four teeth. The upper lip is two-lobed and arches over the stamens, forming a shelter from the rain.

The lower lip is spreading and three-lobed, each lobe being notched. A yellow patch emphasizes the central lobe and purple 'honey guides' on both upper and lower lips - marked streaks of colour - point the way down the throat. Four stamens, with brown, downy anthers lie under the upper lip, in pairs, one behind the other; on the underside of each anther is a stiff spur, the two lowest spurs longer than the others and projecting over the throat of the flower. The upper spurs end in miniature brushes which are intended to prevent the pollen being scattered at the side and wasted.

The seeds in all kinds of the flowers are produced in tiny, flattened capsules, and are numerous and ribbed. The flowers resemble bloodshot human eyes due to the presence of the various spots and stripes on the surface of the flowers - giving the herb its name. This peculiar appearance of the flowers is one of the reasons, that the herb was used in the treatment of eye afflictions since the middle Ages in Europe.

Euphrasia is a native British and European plant; naturalised locally in parts of the USA.Thus found in the pastures and heaths of European countries and some populations of the plant can also be found in the sub-arctic regions of the North American continent.

Eyebright thrives best in moist grassland and chalky pastures, semi-parasitic on grass. Thus it grows best in meadows and grassy places and in mountainous regions.

Open grasslands and meadows are the areas where the herb is commonly found. Summer is the usual time during which the harvesting of the eyebright for commercial uses is carried out, as the plant flowers during this season. Eyebright is a semi-parasitic plant, growing on the roots of various species of grass and also on Trifolium pratense and Plantago species. The grass does not seem to suffer unduly from this parasitism since eyebright is an annual and its cells do not penetrate very deeply into the grass. It hybridizes freely with other members of this genus. The plant is propagated by sowing the seed outdoors in situ in early spring amongst grass in a moist but not marshy soil. It attaches itself by underground suckers to the roots of neighbouring grass plants and takes its nutrients from them. To be cultivated, it must be given nurse plants on whose roots it can feed. Due to the hemi-parasitic mode of life, cultivation of the eyebright is very hard to accomplish, the wild populations of the plant are the virtual source for the entire supply of eyebright used in herbal remedies - and the plant is collected with very little regard to the difference between species.

The aerial parts and the herb of the eyebright are the most commonly used parts of the plant for its medicinal and commercial purposes.

The flowers are small, white or red, occasionally yellow, and often tinged with purple streaks which often flowers in late summer and autumn.

The eyebright are mostly said to be pests free but occasionally seemed to be affected by powdery mildew and aphids.

• The topical as well as the internal remedy made from the eyebright herb is used in the treatment of disorders such as blepharitis and conjunctivitis.

• Disorders such as conjunctivitis and blepharitis of the eyes, the eyebright seems to be able to reduce inflammation in the eye and often used in the treatment of infectious and allergic reactions.

• The remedies made from the eyebright are used in the treatment of conditions affecting the eyes, problems affecting the middle ear, disorders in the sinuses, and in treating mucous accumulations in the nasal passages of patients.

• The dried herb is an ingredient in British Herbal Tobacco, which is smoked most usefully for chronic bronchial colds.

• The plant's astringency makes it inappropriate for treating dry or stuffy congestion.

• Eyebright has recently been used for cleansing and purifying the blood, therefore stimulating healthy liver functions.

According to the astro reports the herb eyebright is under the dominion of the planet Sun and influenced by the zodiac sign Leo. It is under the sign of the Lion, and Sol claims dominion over it.
Quotes from History

In the fourteenth century, however, it was supposed to cure 'all evils of the eye' and is described as the source of 'a precious water to clear a man's sight.' Matthaeus Sylvaticus, a physician of Mantua, who lived about the year 1329, recommended this plant in disorders of the eyes and Arnoldus Villanovanus, who died in 1313, was the author of a treatise on its virtues, Vini Euphrasiati tantopere celebrati.

Gordon's Liticium Medicina, 1305, among the medicines for the eyes, Euphragia is named 'and is recommended both outwardly in a compound distilled water and inwardly as a syrup.' Euphragia is not, however, mentioned in the Schola Salernitana, compiled about 1100.Markham (Countrie Farm, 1616) says: 'Drinke everie morning a small draught of Eyebright wine.' In the eighteenth century Eyebright tea was used, and in Queen Elizabeth's time there was a kind of ale called 'Eyebright Ale.'

Eyebright, says Salmon (Syn. Med., 1671), strengthens the head, eyes and memory and clears the sight.Euphrasia was regarded as a specific in diseases of the eyes by the great herbalists of the sixteenth century, Tragus, Fuchsius, Dodoens, etc., and has been a popular remedy in most countries. The French call it Casse-lunette, the Germans Augentröst (consolation of the eyes).Since the Middle Ages, Eyebright has been a popular herbal eyewash, and even Milton's epic poem, "Paradise Lost," tells us that the Archangel, Michael, used Eyebright to restore the health of Adam's eyes.

The name Euphrasia is of Greek origin, it is thought to have been given the plant from the valuable properties attributed to be as an eye medicine preserving eyesight and so bringing gladness into the life of the sufferer.