The other common names for the herb dog rose are Dog Brier, Hip Rose and Wild Brier.

The name originates from Latin rosa, borrowed through Oscan from colonial Greek in southern Italy: rhodon (Aeolic form: wrodon), from Aramaic wurrda, from Assyrian wurtinnu, from Old Iranian *warda (cf. Armenian vard, Avestan warda, Sogdian ward, Parthian wâr).The DOG ROSE (R. canina) is a flower of the early summer, its blossoms expanding in the first days of June and being no more to be found after the middle of July. The general growth of the Dog Rose is subject to so much variation that the original species defined by Linnaeus has been divided by later botanists into four or five subspecies. 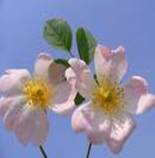 The flowers vary very considerably in colour, from almost white to a very deep pink, and have a delicate but refreshing fragrance. Dog Rose, is often called incorrectly as rosehip. The name dog rose came from the fact that traditionally the roots of the dog rose would cure a bite from a mad dog and more probable theory states that it was the Dag Rose - 'dag' being a dagger - because of its great thorns, and like the 'Dogwood' (originally Dagwood) became changed into 'Dog' by people who did not understand the allusion. The dog rose is the flower of Hampshire.

Dog rose is a deciduous plant normally ranging in height from 1-5 meter. Its stems are covered with small, sharp, hooked spines, which aid it in climbing. The leaves of most species are 5-15 centimetres long, pinnate, with (3-) 5-9 (-13) leaflets and basal stipules; the leaflets usually have a serrated margin, and often a few small prickles on the underside of the stem.

The flowers of most species roses have five petals. Each petal is divided into two distinct lobes and is usually white or pink, though in a few species yellow or red. Beneath the petals are five sepals. These may be long enough to be visible when viewed from above and appear as green points alternating with the rounded petals. The ovary is inferior, developing below the petals and sepals. While the sharp objects along a rose stem are commonly called "thorns", they are actually prickles - outgrowths of the epidermis (the outer layer of tissue of the stem).

The plant normally grows in hedgerows or rows of bushes as well as thickets. In addition, they may be found thriving in the open areas.

Dog rose takes two years to germinate because it may need a warm spell of weather after a cold spell in order to mature the embryo and reduce the seed coat. One possible way to reduce this time is to scarify the seed and then place it for 2 - 3 weeks in damp peat at a temperature of 27 - 32°c .It is then kept at 3°c for the next 4 months by which time it should be starting to germinate. Alternatively, it is possible that seed harvested 'green' and sown immediately will germinate in the late winter. Seed sown as soon as it is ripe in a cold frame sometimes germinates in spring though it may take 18 months. Stored seed can be sown as early in the year as possible and stratified for 6 weeks at 5°c.It may take 2 years to germinate. Prick out the seedlings into individual pots when they are large enough to handle. Plant out in the summer if the plants are more than 25cm tall, otherwise grow on in a cold frame for the winter and plant out in late spring. Cuttings of half-ripe wood with a heel, July in a shaded frame. Over winter the plants in the frame and plant out in late spring. Cuttings of mature wood of the current season's growth. Select pencil thick shoots in early autumn that are about 20 - 25cm long and plant them in a sheltered position outdoors or in a cold frame.The cuttings can take 12 months to establish but a high percentage of them normally succeed. Division of suckers in the dormant season. Plant them out direct into their permanent positions.

The most commonly used parts of the dog rose are the hips, leaves, flowers and the essential oil for its commercial and medicinal applications.

The flowers of the dog rose are in bloom from June to July.

Roses are subject to several diseases. The most serious is rose rust (Phragmidium mucronatum), a species of rust fungus, which can defoliate the plant. More common, though less debilitating, are rose black spot, caused by the fungus Diplocarpon rosae, which makes circular black spots on the leaves in summer, and powdery mildew, caused by Sphaerotheca pannosa. Fungal diseases are best solved by a preventative fungicidal spray program rather than by trying to cure an infection after it is visible. After the disease is visible, its spread can be minimized through pruning and use of fungicides although actual infection cannot be reversed. The main insect pest affecting roses is the aphid (greenfly), which sucks the sap and weakens the plant. Ladybirds are a predator of aphids and should be encouraged in the rose garden.

• The rose hips or the fruits of the dog rose plant as a popular sweet delicacy which is fully rich in vitamins.

• The fruits of the dog rose or rosa canina plant are extensively used to prepare the rose hip syrup that serves as a nutritious and wholesome drink for young children.

• The dogs rose acts as a mild medication to treat diarrhea owing to the presence of tannin in them.

• This herb which is slightly diuretic help in increasing the urine outflow from the body.

• Germans still use them to make an ordinary preserve and in Russia and Sweden a kind of wine is made by fermenting the fruit.

• Dog rose being an astringent strengthens the stomach and useful in diarrhoea and dysentery and helps in coughs and spitting of blood.

• The leaves of the Dog Rose are dried and used as a substitute for tea.

• The roots of the dog rose are used in treating a bite from a mad dog.

• Rosa canina was dried and then smoked with tobacco to produce mild hallucinogenic effects and abnormal dreams.

• Forms of this plant are sometimes used as stocks for the grafting or budding of cultivated varieties.

• The wild plant is planted as a nurse or cover crop, or stabilising plant in land reclamation and specialised landscaping schemes.

• The hips are used as flavouring in the Slovenian soft drink Cockta.

According to the astro reports the dog rose is under the dominion of the planet Venus.
Folklores and Myths

In the past it was believed that fairies, by eating a rosehip and then turning anti-clockwise three times, could make themselves disappear. To become visible once more the fairies had to eat another rosehip and turn clockwise three times. The petals of the dog rose are believed to draw Good Luck in matters of the heart. Folklores tells that they bring good luck in Love Affairs and to remove any kind of Love-Jinxing Tricks or Crossed Conditions an enemy has put on them. Many people also place rose petals on an altar when burning candles with a prayerful request for aid in Love Affairs.