The ancients dedicated it to Artemis, the goddess of women, considering it useful in women's complaints. The genus derives its name from the Greek words chrisos (golden) and anthos (flower), and contains only two indigenous species this and the Corn Marigold, in which the whole flower is yellow. The specific name of the Ox-Eye signifies 'white flower,' being like the generic name, Greek in origin. The old northern name for the Daisy was Baldur's Brow, and this, with many other species of Chrysanthemum became dedicated to St. John. 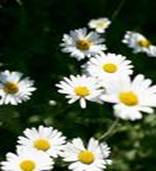 A white glowing flower which enthralls and delights the nature's aura, Daisy is ambiguously present in each aspect of nature. The flower has been adored through a variety of names in all the global languages. Daisy has been diversely classified into many varieties owing to its different colours and hues. The colours widely range from dominant white, yellow, scarlet, red., orange and many others. The white colour of the common Daisy not only signifies peaceful innocence but also denotes sophistication and diligence.

Daisy is a perennial herb with erect, usually unbranched, stems to 1 ft in height. It grows from rhizomes and has characteristic daisy-like flowers. Oxeye daisy is a weed of grasslands, lawns, roadsides, and nursery crops. The leaves initially develop as a rosette at the base. Lower rosette leaves occur on stalks and are from 1 1/2 to 6 inches long. Rosette leaves have rounded teeth or lobes and are widest at the tip and narrow to the base.

Leaves that occur on the flowering stem are stalk-less, lance-shaped in outline, and have smaller rounded teeth or lobes. Leaves become progressively smaller up the flowering stem. All leaves are alternate and without hairs. Flowers occur solitary at the end of stems, are 3-5 cm across and consist of 20 to 30 white outer "petals" (ray florets) that are 1-1.5 cm long and many yellow inner disk florets in the center.

By the middle of May, the familiar yellow centred white flower-heads commence to bloom, and are at their best till about the close of June, though isolated specimens may be met with throughout the summer, especially where undisturbed by the cutting of the hay, as on railway banks, where the plant flourishes well.

The oxeye daisy (Leucanthemum vulgare, syn. Chrysanthemum leucanthemum) also known as the marguerite is a widespread flowering plant native to Europe and the temperate regions of Asia. It was introduced in parts of North America, Australia and New Zealand, where it is now a common weed displacing native plant species in some areas.

A very common flower, Daisy can be seen anywhere in the meadows, gardens, and other grassy green areas. The oxeye daisy is a typical meadow flower, growing in a variety of plant communities such as dry fields, meadows, but also under scrubs, open-canopy forests and waste places. It thrives in a wide range of conditions and prefers heavy and damp soils.

Though Daisies are highly adaptable to available climate and soil conditions still the ones being planted in the gardens do need some extra care and better treatment. The Daisies flower extraordinarily in light, loamy and clay soils and the best ones survive in the well drained soils. Water is a necessity however it is advisable to keep the soil moistened and not hasten in watering the plant as sogging soil gives rise to fungal diseases and root rots .The pH of the soil should range from medium to maximum and acidic or neutral soils enhance the plant growth to a great extent Sunlight is the deciding factor in Daisies growth. A daylight of at leats six hours ensures blooming flowers and on the same grounds extra shade might put a stop to flowering.

The most commonly used parts of daisy are the flowers, the root and the entire herb for its medicinal and commercial purposes.

The white flowers of the daisy are in bloom from late spring to late summer.

• An ointment made from Daisies helps all inflammatory wounds or where there is delayed healing.

• Daisy has been successfully employed in whooping-cough, asthma and nervous excitability.

• Taken as a tonic daisy has been recommended for night sweats.

• The flowers are balsamic and make a useful infusion for relieving chronic coughs and for bronchial catarrhs.

• Externally, it is used as a lotion for wounds, bruises, ulcers and some cutaneous diseases.

• It has also been used to cure cancer and treat Digestive imbalances as an emollient, expectorant and Laxative

• The fresh or dried flowering heads are normally used in the treatment of rheumatism, arthritis, liver and kidney disorders, as a blood purifier, etc.

• Daisy has also been used as a potherb. The green and young leaves can be cooked or eaten raw due to their delicious raw flavour and also been used extensively in the salads

• Flower buds and petals are eaten raw in sandwiches, soups and salads

• A well blended mixture of the Daisy leaves can form a very effective insect repellent.

• Daisy is a fodder for horses, sheep and goats.

The astro reports for the herb daisy say that it is under the sign of Cancer and under the dominion of Venus.
Religious Influence

An old tradition connecting it with the Thunder God, and hence it is sometimes spoken of as the 'Dun Daisy.' In Christian days, it was transferred to St. Mary Magdalen and called Maudelyn or Maudlin Daisy after her. Gerard terms it Maudlinwort.

The white colour of the common Daisy not only signifies peaceful innocence but also denotes sophistication and diligence.

A fine gamboge-yellow, acrid juice, pervades the plant, root, stem and leaves; this fact led those who practised upon the doctrine of signatures, to employ the drug in hepatic disorders, from its resemblance to bile in color.Celandine can be protective and confusing to enemies and it is said to keep off both witches and law officers, and it can be burned as incense or added to floor scrubs for that purpose. Mixed with Poppy Seeds, it is said to help criminal defendants win in court by confusing the testimony of the police.