The word nightshade is derived from the medieval practice of some Italian women using cosmetic eye drops made from this plant to dilate their pupils, and give the eyes a bright, glistening appearance. Large pupils were thought at the time to be a sign of feminine beauty, hence the name bella donna or beautiful woman. 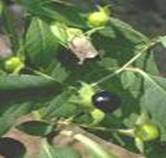 This very poisonous plant acquired its name from Theophrastus back in the third century B.C. It has been termed "the Mandragora of Theophrastus." Its English name, Dwaule, is derived from a Dutch word dwaul, meaning to wander or to be delirious. It is a perennial herb, and one of the more important species of the nightshade family. Because it is so poisonous it was given the name Atropos, which is the Greek word for inflexible. Another meaning is that it refers to "one of three Fates who cut the thread of life." Its pharmacologically active ingredient is atropine.

tropa belladonna is a branching herbaceous perennial often growing from a fleshy rootstock. The root is thick, fleshy and whitish, about 6 inches long, or more, and branching. It is perennial. The purplishcoloured stem is annual and herbaceous. It is stout, 2 to 4 feet high, undivided at the base, but dividing a little above the ground into three - more rarely two or four branches, each of which again branches freely. The flowers, which appear in June and July, singly, in the axils of the leaves, and continue blooming until early September, are of a dark and dingy purplish colour, tinged with green, large (about an inch long), pendent, bell-shaped, furrowed, the corolla with five large teeth or lobes, slightly reflexed.

The five-cleft calyx spreads round the base of the smooth berry, which ripens in September, when it acquires a shining black colour and is in size like a small cherry. It contains several seeds. The berries are full of a dark, inky juice, and are intensely sweet, and their attraction to children on that account, has from their poisonous properties, been attended with fatal results. The berries are sweet, but most of their alkaloids are in the seed. The leaves have an oily, "poison ivy"-like feel and can cause vesicular pustular eruptions if handled carelessly.

When Belladonna is in its first stages of growing the star shaped base of the berries is barely visible. The whole plant is glabrous, or nearly so, though soft, downy hairs may occur on the young stems and the leaves when quite young. The veins of the leaves are prominent on the under surface, especially the midrib, which is depressed on the upper surface of the leaf.

The Belladonna is native to Europe, North Africa, and Western Asia, and has become naturalized in parts of North America. The plant is commercially cultivated in the states of Pennsylvania, Ohio, Wisconsin and California in the United States.

The species grows well in soils that have a chalky composition; it thrives in woods, on waste grounds, quarries and near old ruins. It grows under the shade of trees, on wooded hills, on chalk or limestone, but specimens growing in places exposed to the sun are apt to be dwarfed.

Belladonna succeeds in any well-drained moisture retentive soil in sun or partial shade and generally prefers a calcareous soil. When grown as a medicinal plant, the highest levels of the medically active alkaloids are obtained from plants growing on a light, permeable chalky soil, especially when on a south-west facing slope. Seed are best sown as soon as it is ripe in a cold frame. Germination of stored seed is slow and erratic, usually taking 1 - 6 months at 10�c.When they are large enough to handle, prick the seedlings out into individual pots and grow them on in the greenhouse for at least their first winter. Plant them out into their permanent positions in late spring or early summer, after the last expected frosts.

Seeds must first be soaked with boiling water or baked for a short time in an oven, in order to destroy the embryo of a small parasitic snail that along with a variety of other plant slugs and insects, is likely to attack the seedlings at a later time - the seeds must only be planted after they are all treated in this way. At the bottom of the seed boxes, some pieces of chalk or lime can be placed along with the drainage rubble to facilitate water flow. The germination period of the belladonna seeds is long and seeds are very slow in germinating, the average seed will take four to six weeks or even longer to put out growth. A general rule concerning belladonna seeds is that only about seventy per cent of all seeds sown can be relied upon to germinate. As the seeds of the belladonna are so vulnerable to attack by insect pests, especially if they are sown in the open, any of the potential seed beds must first be prepared with the greatest of care.

To prepare the seed beds, the initial treatment is to burn some rubbish on the ground, in this treatment, the whole soil is dug up and fired all over, all kinds of burnt vegetable material and organic rubbish is worked into the soil. Once the soil has been treated in this way, it is stirred up thoroughly and left as such for a few days exposed to the air and sunlight. Once this period of aeration is over, the ground is levelled and raked finely and finally given a thorough drenching with boiling water to kill any remaining parasitic spores or insects. After this, the soil is left to dry and once it becomes friable, some sharp grit sand is added on the surface, this is again raked and only then are the seeds sown in a thin layer on the surface of the soil. The seeds require considerable moisture to undergo germination at a proper time. Once the plants sprout out, the growing seedlings will become ready for planting out in the month of May, a period when the fear of frost has disappeared. Seedlings at the time of transplantation should ideally be about one and a half inch high each. These seedlings may be placed into the soil following the rain, or in case of dry weather, the ground should be well watered first. For several days, the seedlings must be covered in and shaded from direct sun light using inverted flower pots.

Another method to propagate the belladonna is to use the green tips and cuttings from the side branches. These root well and quite easily in early summer. The buds with a piece attached root can be taken off bigger roots in April and these may be planted to get new plants. This method of propagation is a very successful way of rapid propagation to grow bigger and strong plants at any site.

The roots and the leaves are the most commonly used parts of atropa for its medicinal and commercial purposes..

The bell shaped flowers which are in purple colour generally appears early during the months of June and July and continue to bloom till September.

Slugs are very fond of this plant and have been known to completely remove the outer bark from the stems. Belladonna is also vulnerable to some insect pests. The primary insect species that attacks the leaves of the belladonna is an insect often called the 'flea beetle,' young plants are vulnerable to this insect.

• Belladonna is a most valuable plant in the treatment of eye diseases for atropine obtained during extraction is an important constituent on account of its power of dilating the pupil.

• Locally applied, it lessens irritability and pain, and is used as a lotion, plaster or liniment in cases of neuralgia, gout, rheumatism and sciatica.

• Small doses allay cardiac palpitation, and the plaster is applied to the cardiac region for removing pain and distress.

• It is a powerful antispasmodic in intestinal colic and spasmodic asthma. Occasionally the leaves are employed as an ingredient of cigarettes for relieving asthma.

• In children it is used to treat whooping cough and false croup and also used in treating pneumonia, typhoid fever, scarlet fever and other acute diseases.

• Belladonna plasters are applied to the injured or sprained part and is also recommended as an application for corns and bunions.

• The belladonna remedies help in dealing with peptic ulcers, and it can also help relax spasms along the urinary tubules.

• It is used in treating the physical symptoms seen in people affected by Parkinson's disease's, the herbal remedy helps in reducing the tremors and lessens the rigidity in the body, and improves speech and mobility in the patient at the same time.

• As a drug belladonna is good for its action on the brain and the urinary bladder in disorders connected to these organs.

• Belladonna is also used in homeopathic treatment and to relieve headaches caused by tension.

According to the astro reports the plant belladonna is governed by the Saturn planet.
Folklores and Myths

In the past, it was believed by some that witches used a mixture of belladonna, opium poppy and other plants, typically poisonous (such as monkshood and poison hemlock) in flying ointment, they applied to help them fly to gatherings with other witches. Carlo Ginzburg and others have argued that flying ointments were preparations meant to encourage hallucinatory dreaming; a possible explanation for the inclusion of belladonna and opium poppy in flying ointments concerns the known antagonism between tropane alkaloids of belladonna and opiate alkaloids in Papaver somniferum (specifically morphine), which produces a dream-like waking state.

This antagonism was known in folk medicine, discussed in Eclectic (botanical) medicine formularies, and posited as the explanation of how flying ointments might have actually worked in contemporary writing on witchcraft. The antagonism between opiates and tropanes is the original basis of the Twilight Sleep that was provided to Queen Victoria to deaden pain as well as consciousness during childbirth, and which was later modified so that isolated alkaloids were used instead of plant materials, the whole belladonna herb especially being notable for its unpredictability of effect and toxicity.