Later other numerologists who did research in this field agreed on certain characteristics assigned to each number like 1 as wholeness, 3 as fame, 9 as completion of the cycle that will roll back to 1 again. But however theories with numerologists. Not any number can bring you a lucky vibration, for the basic theory behind numerology is that when there is a noteworthy repetition of any particular number or even a pattern of numbers

in your lifetime then that is supposes to give you a good fortune.Any particular number should be recurrently shown up in a person's life for it to bring good luck and hence considered as a personally lucky number. 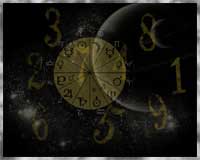 When lottery is played most of the people follow or have a credulous belief or prejudiced about a particular number. The number can be associated with any ;particular or significant event in their life. Here actually the lotto player is trying to win the lottery by following a number or a pattern of numbers which is nothing but numerology. Only in very rare cases people go in for random numbers. Generally the rule of numerology associated with lotto playing says that a number can be considered lucky to play

when it is got to be associated with the person's birth date and the name. So the most important factor which has to be considered to play lottery is the numerical value of the name and the date of birth.

When it comes to birth date there are two types of birthday numbers-the primary and secondary numbers, which are calculated in different ways. Sometimes other factors which are said to influence the wining of lotteries includes details like the individual's life path and the date of the lotto draw. At times the choosing of number is also scientifically approached where some long established methods like tracking and wheeling are followed. Even astrology is sometimes used to select numbers because of the fact that a person's life is based on the positions based on the stars and planets at the time of birth. The basic principle involved in numerology is the summing up of the given digit number. Thus the study of the numbers or numerology helps us in picking numbers which will be most favorable for us and so say if number 8 is a lucky number for you then play or choose a lot of 8 for 8 according to numerology defines success and money.

The number 1 talks about a person's leadership qualities. It can be defined by various other terms like pioneer, strong, creative, courageous, highly ambitious, merciless, egoistic, and proud and they own an independent personality.

A person who has the number 2 as his lucky number is known to be an integrator. They are quite magnetic and also dual by nature. They can be termed as silent, mild, artistic, susceptible, ntuitional, mixed feelings with emotions and delusive.

They are mostly termed as a person with a record of success. People with this number are ardent, clever, do things in order, dynamic, humourous and will always want to lead the path.

Pragmatic and a practical person who are quite stable, on imaginative that adhere to reality. Apart from the positive view they also see the negative qualities which most of the time shows them as mutinous and have an unconventional approach in life.

Person with this number is skilled at conveying ideas, vivacious with loads of life and energy, pleasure-seeking, short tempered, venturesome where they try to take risks to try new things, histrionic, try to attract people because of their behavior.

They are the conciliator who tries in bringing peace and harmony around them. Highly creative but not practical, imaginative, trustworthy, quite expressive and conducive to love with a charming appearance.

A person who has 7 as the lucky number are religious,intelligent,pensive,most of the time don't reason out things, predominantly concerned with their own thoughts and feelings rather than with external things.

They suppose to be the highly successive people and an amazing Entrepreneur. They can be defined by other names like money, strong will power, fame, fortune, strong, keen and wisdom. They stick to their personality and never express their feelings.

They expect perfection in everything and are reformist. They are resolute, emotional, understanding, gallant, very energetic and operative person. They have to fight their way to reach the target. Though controversial but still a philanthropist. Each alphabet is assigned to a particular number and they are as given below
Number 1 - A, J, S
Number 2 - B, K, T
Number 3 - C, L, U
Number 4 - D, M, V
Number 5 - E, N, W
Number 6 - F, O, X
Number 7 - G, P, Y
Number 8 - H, Q, Z
Number 9 - I, R
The basic principle in playing lottery according to numerology is to play with the personal lucky number and the number of the date the lottery is drawn for it is believed good luck and success. Apart beyond numerology there is something called personal luck and time, if which is not favourable, there less chances of winning. So winning is not assured by just calculation of the lucky numbers. But it is human nature to always keep trying for their good fortune.The birth date or the primary number is generally considered to be of importance in case of playing a lottery according to numerologists. This primary number which is derived after the calculation is supposed to be considered and applied in all aspect of life which includes wedding, important career decisions, birth date etc.Let us now see how to calculate the primary number with your date of birth. Say if a person is born on June 4, 1980 in which case the primary number is 4.Another case is when a person is born on a double digit date like June 22, 1980 in which case the primary number is still 4.The way it is worked is, the number 22 becomes 2+2 which is equal to 4.The numbers are added repeatedly till we get a single digit number or the number getting reduced to its lowest value. Now let us find out the other significant number which can be called as the secondary number. Whenever we play or for any purpose use both the numbers and try your luck. In course of time we will be able to arrive at one number which must be favorable to us. The calculation of the secondary number is slightly difficult than that of the primary number. Say if a person is born on June 4, 1980, now the numerical values of the month, date and the year is added together and then reduced to its lowest value. The calculation works like this,
Month - June = 6
Date - 4
Year - 1980 [1+9+8+0=18] which is further reduced 1+8=9
The equation is now 6+4+9=19 again reduced to 1+9=10 and finally 1+0=1
Thus the person's secondary number is 1.
Apart from the above mentioned ways one can also try other means with the primary number like say if you're lucky number is 4 you can play 4 plus with any three numbers 33, 42, etc.In other case compound number can also be used that is when the two digit number is added or subtracted it should end up with a number which equals your primary number. A person born October 27 can play combinations like
7+2=9
4+5=9
3+6=9
8+1=9
9+0=9
The other most simple way which can be still played in lottery is to note the day you were born, the month and finally the year which may be like June 4 1980.So here the numbers which can be used while playing are 4, 7 and 80 where 80 can be further brought down to 8.Thus when you go to play your favorite lottery game, the lottery wheel should also studied properly for you need to work on the number which is finally going to coincide with winning number. So selection of the numbers plays a major role. In a full lottery wheel though we get a number of combinations it is quite expensive which will be okay when it is played by a bunch of people and is commonly referred by the name lotto syndicate. Abbreviated or Short lottery wheel is anytime better, less expensive and the chances of winning are much more than the full lottery wheel. Thus selection of a pertinent lottery wheel which will match with your budget and finally the numbers makes the show.