We should know that the later has both numbers and letters for our script whereas the former ones have only letters. Though the Greeks and the Hebrews don't have numbers but still they can have a numeric value to each letter or each word calculated by the gematria method of numerology. 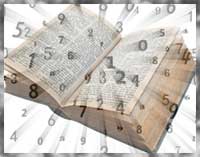 Let us consider the word "iasous" which means Jesus in Greek. As gematria assigns a numeric equivalent to each letter, the word "iasous" is assigned the following where i = 10 a = 8 s = 200 o = 70 u = 400 s = 200 The number 40 is very much significant in the Bible for about 40 days Jesus was in the desert and for 40 years the Israelites aimlessly wandered in the desert and the days in between Jesus' resurrection and his ascension was exactly 40 (Acts 1:3).Similarly the number 7 is also said to be very important in the Bible for it is God's number ( Genesis 7:2-4; Revelation 1:20; 4:5; 5:1, 5:6).So each number is said to have some relation with the Bible.

Daniel and Revelation which are supposed to be a good predictive books or part of the Bible teach a system of numerology which is tough and related to each other showing some definite pattern. Thus Bible numerology is said to deal with the meaning if each number in the Holy book, Bible.Just like other distant past religions and set of theories and philosophies which events associated with numbers, the Biblical numerology also talks about the belief of the Judeo-Christian in the numbers with the bible. Though the cogency of the bible numerology is still being argued about in different parts of the word for the fact some people try to give too much of importance to the numbers and finding a meaning which has no association thus making no sense.

The basic meaning behind this number is that it means unity, onset and supreme power. Deuteronomy 6:4 says The LORD our God, the LORD is one. Ephesians 4:5 says "one Lord, one faith, one baptism."

The number 2 according to the Bible denotes differences, quality of being sharp and clear, testimony and it is the number of divison.It denotes the choice one has to make from two selection of dual choices will end up in evil. There are examples like -

The understanding of the number 3 says it is true, full, considerable and spiritual completion.

The number 4 talks about the creation, physical kingdom, reasoning and divine understanding.

This number is known as the number of spiritual refinement, apprehension, salvation and mediation.

The number 6 is known as the number of Man who is against God. It indicates imperfection.

Number 7 is the number of divine or spiritual completion.

The number 8 denotes the new origin and is also considered to be the symbol of success, complexity and progress.

This is the number of accomplishment and execution. This also denotes the recapitulation of a person's work, end of matter and the last of the integers.

This number is known to be as the number of spiritual completion and perfection of command.

This denotes the spiritual ministry.

This number denotes grief and sadness.

This is the number of evaluation and trials.

– 50 fifty days after Passover the Pentecost feast were celebrated. (Leviticus 23:15-16)

This number is related with judgment and deputation of human.