2014 is the Year of the Horse and it will be on January 31, 2014.The Chinese celebrate the new year on the new Moon day of the first lunar month. It signifies the start of the spring season when the sne enters the 315th degree on the zodiac wheel.Strengths of a Horse People born in the year of the horse have good communication skills.

They love getting much attention, are kind and clever. They are talented and active in work. Are popular in social circles as well and are good extroverts. 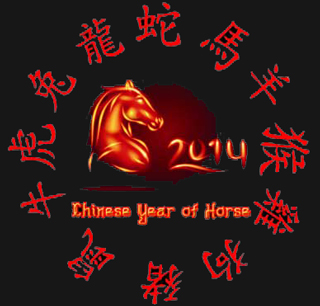 Weaknesses of a Horse: They cannot bear too much constraint in their lives. They have outward show of interest and lack much commitment. They are impatient, egoistic and selfish at times.

Health of a Horse: Generally horse people are gifted with good health all through their lives. But at times too much stress and strain might take a toll on their health. Hence they should take some time off from work.

Also should avoid too much partying and over–eating.

The other Horse years are:

Lucky Features of the Horse

Horse people can be a jumble of contradictions.

• Although Horses work well in groups, they prefer to work by themselves

• In social settings, they are cheerful, charismatic

• In romance, they have a tremendous need for intimacy and belonging.

• Travel is a favorite pastime of the Horse people

• Horses are well suited to careers such as adventurers, poets, travel writers or politicians.

• Horses are most compatible with : Tiger, Dog, Sheep

Best with: Tiger, Goat or Dog

Career of a Horse

Horse people have good communication skills and hence they are adept in careers related to this area. Horse people are good in decision-making and leadership techniques. They do well when they work with a group. Horse people make good sales personnel, journalist, translator, tour operators and the like.

Those born in a Horse year have a good pleasing disposition and this makes them quite comfortable in a relationship. They are quick-witted and hence keep a relationship going despite hurdles at times. They are good in expression of their love and feelings.

Year 2017 would be the Year of the Rooster