It is really a tough job when it comes to predicting the next US President. Astrologers around the world are hooked onto the charts of the Barack Obama and Mitt Romney. Election is scheduled to take place on November 6th, 2012 when the Mercury is in retrograde motion. Hence it would be a tough battle for both the candidates, taking into consideration the retrograde motion of Mercury which usually gives a tough battle.

After July. 2012, the planets are much in favor of Obama becoming the President again. According to Vedic principles the Dasa period of Saturn is currently running for Obama and Saturn is a good planet for him. Also Jupiter aspects Saturn which is much beneficial for him. Hence getting another term would be an easy job for him.

Coming to Western astrology, Obama's natal Venus is in trine with transiting Neptune. Neptune has increased his chances of favour during the present elections. Another favourable thing is that his progressed Sun and progressed Venus are aligned with his natal Venus. 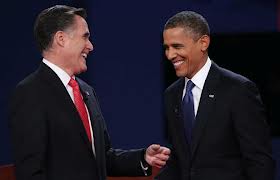 Major transformations are said to occur when the outer planets overcome Saturn. Pluto particularly gives the favour of the masses to the native. Transiting Pluto trines Obama's Pluto on November 6th, 2012.Transiting Pluto has been a major driving factor for the winner in the history of the US Presidential elections.

And Obama has strong connections to the U.S. Moon which is at 25° Aquarius, both natally and by progression during the year 2012. Obama's natal Vesta at 25° Taurus squares Uranus and trines Saturn, which are at 25° Leo and 25° Capricorn respectively. In 2012, his progressed Mars is at 25° Libra, while his progressed Ascendant is at 25° Aries. All these connections to the U.S. Moon indicate good rapport with voters as far as Obama is concerned.

Hence the chances of the present incumbent, Barack Obama winning the US Presidential Elections of 2012 are brighter when compared to that of his nearest rival, Mitt Romney.