Watch Out The Little Fellow Goes Retro Again...From The Perspective Of FindYourFate

PRLog (Press Release) - Jun. 5, 2014 - TEXAS CITY, Texas -- Mercury retrograde is just round the corner and all media are in a frenzied mood.

In case your phone goes awry or your mails bounce back or a contract signing goes haywire you have just the right reason to blame for this season that Mercury is in a retrograde motion. Mercury retrograde is nothing but a "time-out" given by the cosmos for you to rejuvenate and renew your energies. 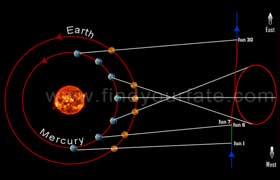 "We are already in the shadow period from May 23, and the effects would be felt till July 16, that is the approximate time when the shadow period at the other side ends. Mercury rules a lot of important things in our daily lives that it is just not advisable to shoo off this retrograde motion as a trivial matter. Those with Gemini or Virgo Sun sign or Ascendant feel the effect of Mercury retrograde in more pronounced manner than others. But, it does not mean that the others are let off from its haunting motion. No doubt Mercury is often dubbed as the Cosmic Trickster by astrologers at large." – details Nimmi, the Senior Analysis of divination portal, findyourfate.com.

"We now live in a gadget-cluttered world, and much is relied on communication online than interpersonal connections and communications. Hence Mercury retrograde motion has gained significant popularity over the years as the IT (Information Technology) Age began to spread its wings. Ever thought that sometimes you may need to shut off from the net, get off hook from your smart phone and live a cave-man like life. Then Mercury retrograde period would be the best time as this is the period when astrologers ask you to lay low as far as communications are concerned. Be prepared for a Zen-like life during this period." – advises Nimmi.

Did you know that all the three Mercury retrograde periods in 2014 start in a water sign like Cancer for now, and end in an airy sign? For the current retrograde, its Gemini, the airy sign. Hence, the focus would shift from home-based activities which are ruled by Cancer to mental stimulations ruled by Gemini around June 17 of this year.

Did you know that all the three Mercury retrograde periods in 2014 start in a water sign like Cancer for now, and end in an airy sign? For the current retrograde, its Gemini, the airy sign. Hence, the focus would shift from home-based activities which are ruled by Cancer to mental stimulations ruled by Gemini around June 17 of this year.

Forecasting on this Mercury retrograde, the Senior Analyst of FindYourFate.com further advises, "For this Mercury retrograde season, be prepared for lost mails, missed flights, lay-offs, getting stuck in traffic, hard-disc crashes and the like. But this retrograde of Mercury in Gemini is potentially considered a productive period for professionals such as journalists, writers, salespeople, educators, artists, bloggers and the like. These people would be able to put up their works in a whole new way during this retrograde season."

Also be known that Mercury retrogrades have a cycle in which, they have an exactness of covering the same signs, the same degrees and approximately on the same calendar days. The exact Mercury retrogrades we are experiencing in 2014 were the exact same signs, same degrees and approximately the same calendar days of 1935. Hence be prepared for history repeating itself...

Interested to find more information on Mercury Retrograde in the year 2014? You may like to visit a dedicated section for this stellar phenomenon on the portal of FindYourFate.com at https://www.findyourfate.com/astrology/year2014/2014-Mercu... .