Conjunction of Jupiter and Venus

07/15/2014 -- From Sunday 17th late evening to Monday 18th early morning of August in the year 2014 the planets Venus and Jupiter will pass within a quarter of a degree of each other in the sky.

This takes place in the Beehive star cluster (M44) in the constellation of Cancer - the Crab. This phenomenon should be largely visible in the East-Northeastern sky right from August 12. Conjunctions are rare events where two or more objects will appear extremely close together in the night sky.

Hence this conjunction of the two bright planets in the sky is not to be missed this year."Conjunctions of Jupiter and Venus are comparably frequent as compared with other conjunctions, occurring every 13th month on an average. Out of these conjunctions, not all are favorable to watch like this year's event. Some of these conjunctions occur too close to the Sun and thereby obscure the viewing by normal human eye. Similar conjunctions like this year are expected to be repeated over a period of 24-years. The previous conjunction of Venus and Jupiter occurred on 1 December 2008. The next episode is expected somewhere around 2016." – reveals Nimmi, a Senior Analyst of FindYourFate.com. 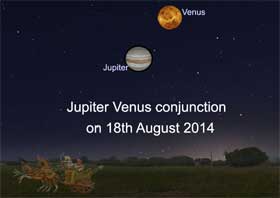 "Venus and Jupiter are brilliant planets in our sky because their cloud covers. The clouds surrounding these planets reflect a higher percentage of the incoming sunlight and thereby making these planets the brightest ones among astral masses. Venus is obvious bright because of its relative proximity to our planet Earth. Jupiter shines brightly for its mammoth size and reflection of lights. Venus and Jupiter rank as the third-brightest and fourth-brightest bodies in the sky after the luminaries, Sun and Moon." – She adds. Link to birth of Jesus Astronomers say that a previous such a Venus/Jupiter conjunction in 2 BC saw the birth of Jesus Christ called the Star of Bethlehem. The Venus/Jupiter conjunction in June in the year of 2 BC was actually happened in the sign of Leo, the sign of Kings, and the conjunction occurred very near to the fixed star Regulus which is the star of royalty. Jupiter as King of the planets denotes royalty. Venus is associated with passion of the Lord. "When this conjunction too place Sun representing the father, the Moon ruling the Mother and Mercury, the messenger were all located in the nearby constellation of Leo, the Lion. Here it is to be noted that Jesus was called the "The Lion of Judah". Thus the Venus- Jupiter conjunction holds biblical relevance too." – reveals Nimmi on behalf of the team of FindYourFate.com.

What to expect... On 18 August 2014, the exact Conjunction between Jupiter and Venus occurs in the sign of Cancer, in the constellation of Pushya (3rd pada) in Libra Navamsa according to Indian Vedic astrology. The Star Pushya is a very auspicious star. This will be a spectacular event, and would be a great blessing for the world at large. Throwing light on the benefits of this stellar conjunction, Nimmi further explains, "When the planet of abundance (Jupiter) unites with the planet of love (Venus) in the sky expect generously in your relationships. Venus and Jupiter are of course the Great Benefics, and their conjunction is very positive for these turbulent periods."

Trivia Do you know that such a celestial wonder had potentially deadly consequence in the Indian Subcontinent? In May last year, It is said that the Indian Army troops in the Himalayan Border mistook the Venus-Jupiter conjunction for Chinese spy drones and were readying for retaliation. Astronomy and astrology meeting international politics at its best!!!