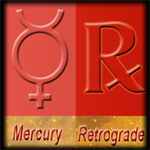 Make the most of this Mercurial Influence!!!

Use our charts to find when Mercury goes retrograde. In this way you can make sure that it does not make yor plans go awry. Plan important personal and professional events when Mercury goes direct. The Mercury retro period can be managed well when you know its coming beforehand.

What is Mercury Retrograde?

All the planets of the solar system move in the same direction around the Sun, each with a different rate of speed. Mercury's orbit is 88 days long; therefore approximately 4 orbits of Mercury around the Sun equals 1 Earth year.

Occasionally, Mercury as like a few other planets appears to slow down, then stop, and then move slowly backwards for several weeks and this is termed as

Why does this typical phenomenon take place? This occurs because Mercury travels faster than the Earth, and it periodically catches up with Earth, passing us by. When Mercury "goes retrograde" it does not actually slow down, stop and move backwards. It only appears to do so. The retrograde henomenon has to do with the relative speed of the Earth and Mercury as well as their relationship to each other at a particular point in their orbits. There are three such Retrograde periods each year, each lasting around 3 weeks.

Mercury Retrograde! is an astrological app designed to help people determine if Retrograde or Direct and when it is going to happen.It graphically shows where Mercury and Earth are in relation to each other and correct Zodiac houses. A color coded calendar counts down the days until future Retrograde/Direct events.

Did you know that :

More than 50 % of the Wolrd's top 100 Fortune businesses were started under the Mercury Retro period.

When Mercury is retrograde in motion it gives us a chance to correct the present course of events, retune them if necessary. Misunderstandings in relationships can be sorted out. This is a period when the truth is brought to the fore no matter it is in your favour or not.

Take Mercury retro period as a gift from the heavens when you can reflect, review and re-correct your life's plans. In fact every cloud has a silver-lining..

The astrological significance of a retrograde planet


In astrological mythology, Mercury is the messenger of the gods. Hence the planet Mercury rules anything related to communication like:

• classes and schools and colleges

• traveling and travel equipments such as cars, bicycles, trains, and planes, ships,etc.

During Mercury retrograde period it is advised not to do the following as it might land you in trouble:

• purchasing or settling up of communications equipment.

• sending important correspondence or any type of message

But a Mercury retrograde period is thought to be very excellent for:

• catching up on old business

• cleaning out the metaphorical closet

This is just a generalized sum up. Some people are very sensitive to this periods whereas some other are totally unnerved by the same. So if you are any of your family member or friend had been born during a Merc retrograde, what are you supposed to do?? Do not worry or lose hope. Many very intelligent people have been born during this period too. Usually such people are great thinkers. They are very individualistic as well. They garner arll the information around them and come to a conclusion by themselves. They cannot be influence easily. They also have the special gift of seeing things in a different perspective, that is they have to eyes to see beneath any problem.

What is to be done?

• Finish projects which involve communication before the retrograde.

• Try to avoid launching new projects during the retrograde

• Do needed repairs on machinery/house before the retrograde

• Do not hold an election during the retrograde

• Do the follow-ups on a project already started

• Wrap up or complete a project already started

• Catch up on paperwork

• Enjoy a good sense of humour.

Note:Positions are apparent positions (where they appear in the sky at the time), not true positions. This online merc. retrograde is provided for free. www.findyourfate.com does not make any warranty as to the suitability of this retrograde data for any purpose.

How to Survive the Shadow Period before and after Mercury Retrograde.

With the Mercury going retrograde three times a year, there is a common question that arises from time to time. That is whether Mercury going retrograde affects the stock markets and contribute to its volatility. Statistics taken from the Dow Jones and other stock markets around the world over a consistent period of time has shown that Mercury retro days did give some profits than the days when Mercury was Direct. Put in directly Mercury retro. does not affect trading decisions in the long and short term. Modern day astrology has brought about a bad sentiment in connection with this and with a great amount of hype created along with it..

Another myth surrounding Mercury going retrograde is that there would be communication breakdowns, email issues, appliances malfunction, documents get lost, failures in major projects and the like. From time immemorial it has been found that humans are prone to errors or mistakes and failures and Mercury retro period is no exception for this. If you are not into believing this myth, then you can undergo long journeys without any hassles, your accounts do not get messed up, there would not be any major communication glitches in your life and what not....

One advise the author would like to give regarding this is that we can set our minds towards organising our stuff, cleaning our wardrobe or desk, getting rid of accumulated papers, cleaning our cluttered mind, and what not three time s a year when Mercury turns retrograde. This is one beneficial aspect of Mercury retro period that can be put to good use.. in that way you can become a good organiser.

Every time Mercury goes retrograde, we are warned against signing important documents and to keep safe while driving which is applicable even otherwise. Can driving erroneously or placing vital papers haphazardly when Mercury is direct going to save you from troubles???

So why all the fuss about Mercury and its Retrograde ?

All the planets but for the luminaries, the Sun and the Moon go retrograde sometimes every year and some do it every few years. By retrograde it means that for a viewer from the earth, the planet seems to pause for quite sometime, then begins to move backwards through its normal course. But the planets actually do not change direction.

Though the other planets have similar retrograde motions, Mercury being a nearer planet to the earth has been brought into much significance thanks to the recent-day astrologers.

Mercury retrograde in a new light

Recent studies have shown that many businesses started during this are highly successful when compared to those initiated during its Direct days. The success can be attributed to a larger overview of the scenario during Mercury retro period. In other words this period is taken as reappraisal period and hence the success. When Mercury is in retrograde, it gives much time for contemplation and enhanced thoughts that would surely lead one to success and not failure as much homework has gone into it.

This period can be taken as a time for better communication- as Mercury is the ruler for all sorts of communications and contacts. In this way many personal and professional issues can be sorted out amicably without much fun-fare.

So the next time, Mercury shows to be retrograde, welcome it in style and do not be a coward couching around...

Why all the fuss about Mercury only..

Mercury is called the planet of communication, learning and understanding. In other words it relates to how we garner information and sort them. In a wider sense Mercury rules over our connections and contacts as well by all means of communication possible on this planet. But it does not deal with the intricacies of life nor does it concern about the moralities involved.

Mercury is the closest planet to the Sun, never more than 28° away from it. As a result, the only possible aspects that can occur between the Sun and Mercury are conjunction (0°) and semi-sextile (30° ). Hence Mercury can only ever be in the same sign as the Sun, or the preceding or the following sign. This close intimacy with the Sun has a profound effect on earthly lives whether you take it or not.

Do not be carried away by false propaganda about your communication mishaps related to Mercury going Retrograde. Instead focus on the message that Mercury holds for you during its retro phase. There's a whole world wide open out there other than the present communication mishap you are into. Make the most of Mercury retro motion and enrich your lives and those of that around you..