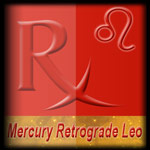 When Mercury is retrograde in the house of Leo, peoples high aspirations and ideas would be put to great test. There would be confusion of sorts over the same. People would be found to lose their temper more often than when Mercury is retrograde. Those in power and authority are likely to make major blunders resulting in utter chaos in the country. Love issues are likely to hot up in this period. Also make sure that children and elders are not given way for over -indulgence in anything. Speculative deals of sorts are to be put off for this period. Disorders related to heart are likely to creep in during this time, hence maintain a tight vigil over your food and other habits.