The Lantern Festival of 2013 observed by the Chinese people falls on February 24. It is held on the 15th day of the first lunar month every year and hence varies from year to year according to the Moon's position. Lantern festival is also called as Yuanxiao Festival, Shangyuan Festival, Chap Goh Meh Festival or Yuen Siu Festival.

It is celebrated in China, Hong Kong, Malaysia, Singapore, Taiwan and Vietnam. After the Chinese New Year this is an important festival when during the nights wonderful Chinese lanterns are lit. Red lanterns can be seen in every house, shop and street corners. 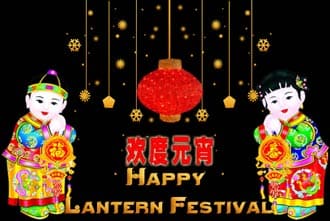 The lanterns symbolize people letting go off their past shelves and getting a new one. Another specialty is the making of Yuanxiao â€“a rice ball stuffed with sweet fillings. Various other activities like watching fireworks display, guessing lantern riddles and folk dances also fill this day. During this time all migrant workers and students get home and hence there would be chaos on the roads and rail-lines.

History has it that a Han dynasty emperor ordered lanterns to be displayed in the palace buildings to show respect for Buddha for the prosperity he has bestowed on the people. During the Tang, Song, Ming and Qing dynasties, lighting lanterns became a tradition for Chinese people. One legend claims it was established to honor Taiyi, the God of Heaven. Another declares it's a birthday celebration for the Taoist god, Tianguan. Another says the festival commemorates the battlefield death of Lan Moon, leader of a great rebellion against a tyrannical king. Another legend claims the Nian, a bloodthirsty beast with an insatiable appetite for people, houses, etc., was the real inspiration. When villagers covered their villages in red and lit bamboo torches, the big, bad Nian tucked tail and ran away which was a reason to celebrate.

Guessing riddles is regarded as another important part of the Lantern Festival. People write different riddles on pieces of paper, and paste them onto colourful lanterns. Visitors are supposed to guess the right answers . If one has an answer to a riddle, he can pull the paper from the lantern to verify the answer. Gifts are presented to the people who get the right answers. People of different age groups enjoy this as it is mentally stimulating.

Traditional Chinese folk dances like Lion dance, dragon dance and walking on stilts are performed during the lantern festival. People wear lion type of gear and perform different stunts to enthral the audience by their dexterity. They jump, leap and do different tricks to entertain the audience. Walking on stilts is another dance performed during this day. People blindfold themselves and perform different moves while they are still on stilts.

Yuanxiao, also called tangyuan, is a dumpling ball made of sticky rice flour stuffed with different sweet fillings. Eating yuanxiao has become an essential part of the lantern festival. The methods for making Yuanxiao differ by region and fillings include sugar, rose petals, sesame, sweetened bean paste, and jujube paste. Some do not have fillings. Because tangyuan can be boiled, fried or steamed, and each has a unique taste, it is very popular. Yuanxiao is round in shape so it is endowed with the meaning of reunion, harmony and happiness. During the night of the festival, family members sit together to taste yuanxiao and appreciate the full moon.

The highlight of the day will be grand parades which will feature giant lanterns depicting all historical and mythical characters. There will be lanterns depicting the 12 signs of the zodiac in the Chinese astrology, with the snake, to feature prominently as this is the snake year.

• When is the next Chinese New year?