Janmashtami or Krishna Jayanthi is the celebration of the birth of Lord Krishna. It is said that Krishna was born in the year of Visvavasu, some 5227 years ago. God Vishnu took the form of Krishna and was born in this world to destroy the evil forces. He was born on the eighth day also called as Ashtami in the Hindu month of Shravana.
He was born under Rohini Nakshata, a very auspicious one. This usually falls in August-September of the Christian calendar. It is well known that Lord Krishna was born in this earth to remove his uncle Kansa who committed many atrocities against the people. 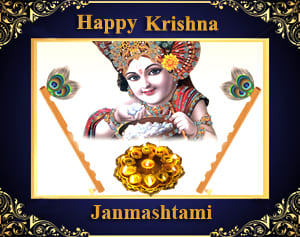 Rohini nakshtra and Ashtami do not fall on the same day hence this event is celebrated for two days. It is said that Lord Krishna was born on a Wednesday. The first day is called Krishnashtami and the second day is celebrated as Kalashtami. On these days festivities take a new turn during the night time. Lots of hymns on Lord Krishna would be rendered and arti or pooja performed for the lord. People fast on this day for their betterment.

The lord is bathed in a mixture of milk, ghee, oil and honey and this is given as prasadam to the pilgrims. Also the water from the Ganges river is used. People meditate on Lord Krishna, Balarama, Vasudeva, Devaki, Nandagopal and Yashoda till moon rise. Once the moon appears in the horizon tender coconut water would be offered to the Moon god. People forbid sleep and remain awake the whole night singing praises of Lord Krishna.

During Janmashtami Moon is in angle with the Mercury and Sun. This placement gives rise to Budha-aditya yoga. Moon lies hemmed between the planets Ketu and Jupiter in the 10th house. With this placement worshipping Lord Krishna would be auspicious and shower blessings on all.

• Did you know that Lord Krishna was born in Rohini Nakshastra?